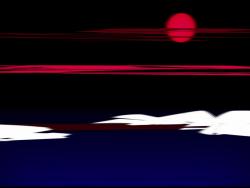 The ligth the shade (DE)

the light - the shade" is a poem by Robert Lax that plays with the contrasts and opposites light and shade, with bright and dark, black and white, red and blue. The film begins with a nighttime scenery in a city, moves into a room and starts watching the movement of the shadows on the wall. Finally the camera enters the screen of a laptop and goes deeper and deeper into the poem. The film becomes a journey through the realm of imagination, through spaces and pictures, through letters and words. In that way the minimal language of the poem is unfolded into unexpected pictures.