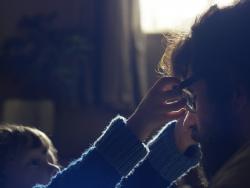 In 1983, at the age of 45 and after the theologian John Hull turned completely blind. Hull, who died 2015, recorded his thoughts on blindness on tape. He wrote his excerpts up into Touching the Rock, his account of the existential crisis of going blind, of “being trapped in a little place”, searching for meaning in the alien. The tapes made "Notes on Blindnes" first a short produced for the New York Times  than the debut documentary feature from directors James Spinney and Peter Middleton.

“Spinney said Hull described this sense of hunger, this longing for optic stimulation, ‘as like the lungs pant for air’. “He felt starved. What he describes through the diaries is this neurological re-wiring. A reforging of his identity.”
(citation Guardian Interview June 28,2016 by Henry Barnes). Check full Guardian-Interview